Camden Yards changed the game in Major League Baseball, ushering in an era of retro-modern ballparks and ultimately transforming most of today’s venues. So for Opening Day claims to fame, Rick Sutcliffe could simply point to April 6, 1992, when he followed up President George H.W. Bush’s ceremonial first by pitch by throwing the first real pitch in the history of the Orioles’ current home — on the way to a 2-0 shutout against Cleveland. Let’s start with a quick remembrance of that outing to equip you with a potential trivia stumper for your friends, complete with a look at his ’92 Opening Day delivery pictured here and the video below:

Of course, we’re here for more than trivia assistance. The Opening Day Countdown Down Under wayback machine is celebrating the essence of Opening Day through the jersey numbers of yore, and we’re going a little more old-school than that for No. 40. 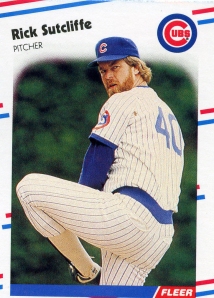 This one’s for Cubbie fans.

When you think of Sutcliffe, who made nine overall Opening Day starts in his career, you probably think of the right-hander (and current broadcaster) who wore No. 40 for Chicago and so often walked off the mound after the top of the seventh to segue into Harry Caray’s rendition of “Take Me Out To The Ballgame” up in the press box. It was a way of life, as sure as Cubs on WGN, and Sutcliffe started each Opening Day for the Cubs from 1985-89.

Take a close look at April 9, 1985. There were still no lights at Wrigley Field then (not until ’88). Sutcliffe was the man in the NL. In ’84, he had come over to Chicago in a seven-player trade from Cleveland that sent Joe Carter to the Tribe, and Sutcliffe had promptly gone an unconscious 16-1 to lead the Cubs to within one win of a World Series berth. Sutcliffe, 20-6 overall that season and the NL Cy Young Award winner, even had knocked one out of the entire ballpark to help his own cause against San Diego in that National League Championship Series, as you can see in this MLB.com video:

Now it was his first Opening Day as a Cub, and Sutcliffe did not disappoint the capacity crowd in the Friendly Confines. He nursed a 2-0 lead over the Pirates into the eighth inning, finally tiring and being replaced by Lee Smith after giving up a Jason Thompson RBI single. Big Lee closed the deal, and it was a happy opener at Wrigley.

The 2014 Cubs open the season March 31 at Pittsburgh, and their home opener is April 4 against the Phillies. Who should be No. 39 in our countdown? Suggest away in the comments below. MLB Schedule | Order Tickets